“Meantown,” is featured in the Winter/Spring 2020 issue of Rock and a Hard Place Magazine.

The story is violent and shocking and heartbreaking, perfect for a magazine that bills itself as “A chronicle of bad decisions and desperate people.” 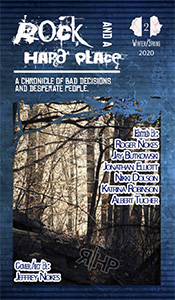 Vigilante Happy Hour broadcast
At one time in late 2016, producers at Authors on the Air thought it might be a good idea to have Allan co-host a radio show along with fellow authors Luke Romyn and Claude Bouchard. This experiment lasted exactly one episode, with New York Times bestselling author Russell Blake as the guest, on March 27, 2017. Here is that rare hour of radio madness.
Listen now

Interview by author J.F. Penn
In January 2014, the prolific and talented J.F. Penn interviewed Allan about writing horror and thrillers.

Appearance on The Taco Society Presents
This September 5, 2017 interview by horror author Tony Tremblay, along with Sydney Leigh and Phil Perron of the Taco Society touches on the process of writing, and the difference between writing horror and mainstream thrillers.

Thanks for finding your way to Allan’s dark corner of the web. If you’re into thrillers, horror, crime fiction, or are just interested in possibly winning free stuff, please take a moment to sign up for Allan’s semi-irregular email newsletter, where your email address will never be shared for any reason.

We use cookies to ensure that we give you the best experience on our website. If you continue to use this site we will assume that you are happy with it.OK